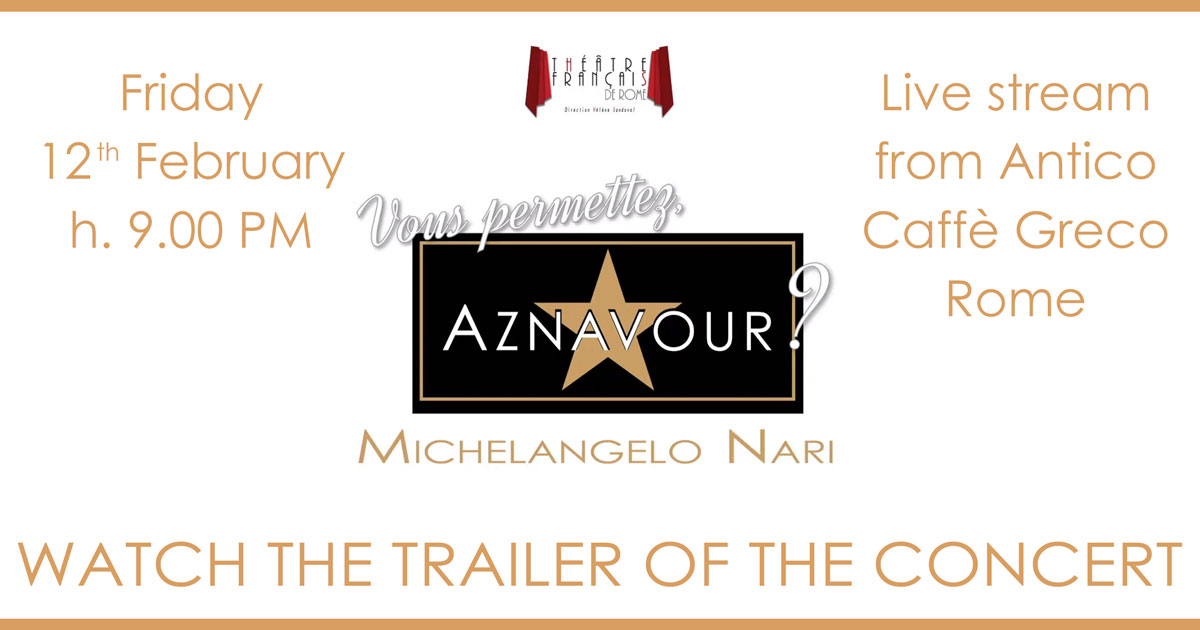 Hello my friends! Just one month ago I was on stage with the debut of “Vous permettez, Aznavour?”, and today you can find the trailer of the concert here; I really hope to be able to sing again these songs as soon as the global situation will improve! 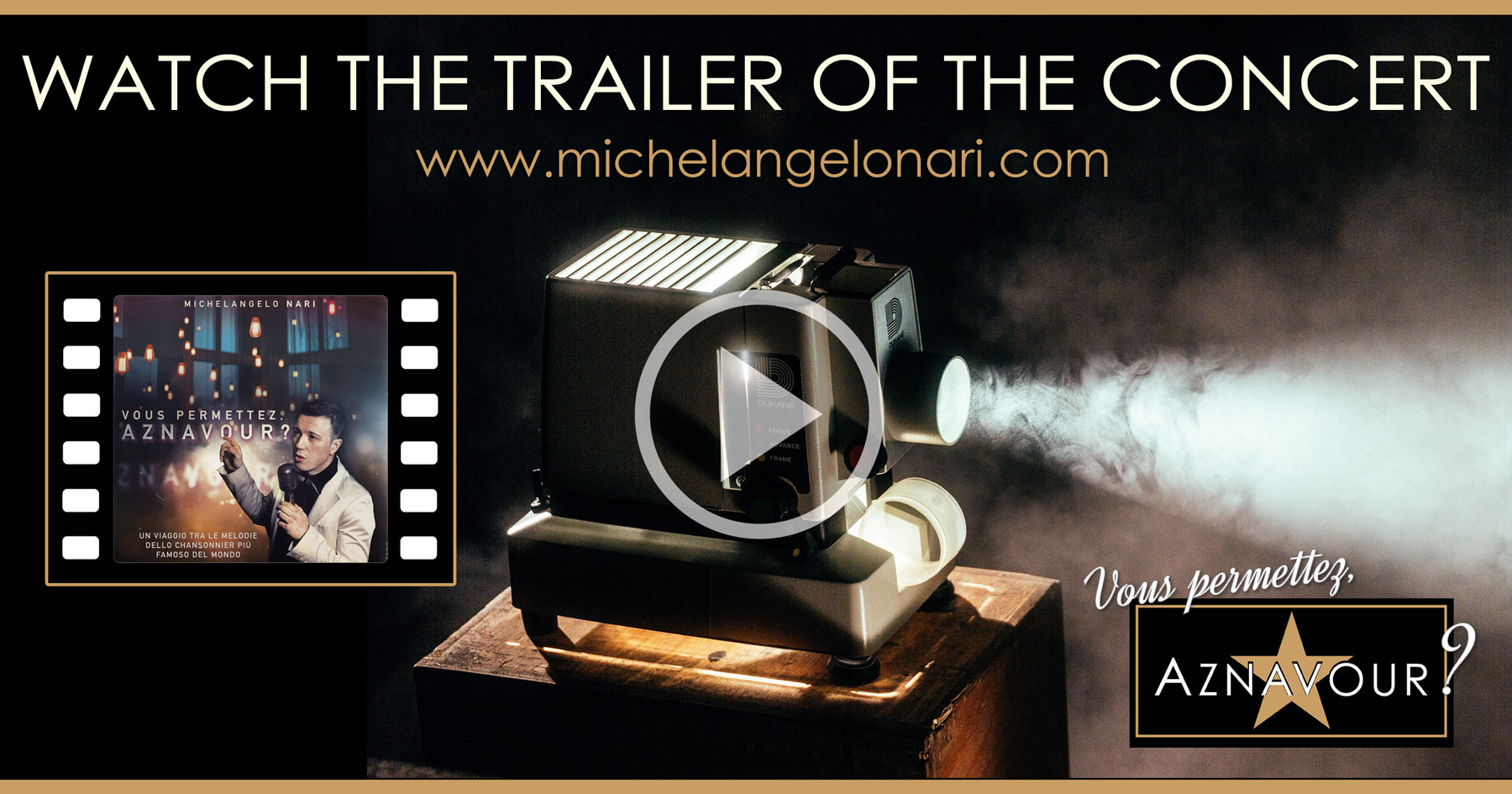 In the meantime, let’s launch the section VIDEOS in this website, in which you’ll find some clips of my last shows.

Let’s not give up! 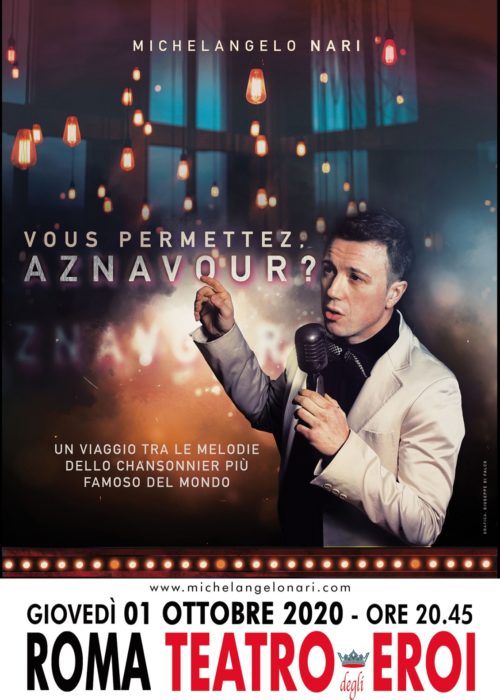 Happy Monday, my friends! The album “Vous permettez, Aznavour” has been available for three weeks on this website (you can order it by clicking here), thank you so much to all those who bought it… keep ordering it and share if you liked it!

I want to remind that for each CD purchased, I will make a € 1 charitable donation to the Aznavour Foundation. The Foundation was co-founded by Charles Aznavour and his son Nicolas Aznavour with a mission to continue Aznavour’s humanitarian efforts and implement social, cultural and educational projects all over the world. Check the website for more information: www.aznavourfoundation.org.

My friends, let’s end the month of July with a very good news: from today, “Vous permettez, Aznavour?” is available on digital stores. You can find and download it on Spotify, I-Tunes, Amazon, YoutubeMusic and many more other portals, edited by Fluente Records. Thanks for listening to it and for entering in this musical world, so precious and elegant to me. If you’d rather book the CD, you can always order it by clicking here.

Thank you so much, and good music to all of you😊! 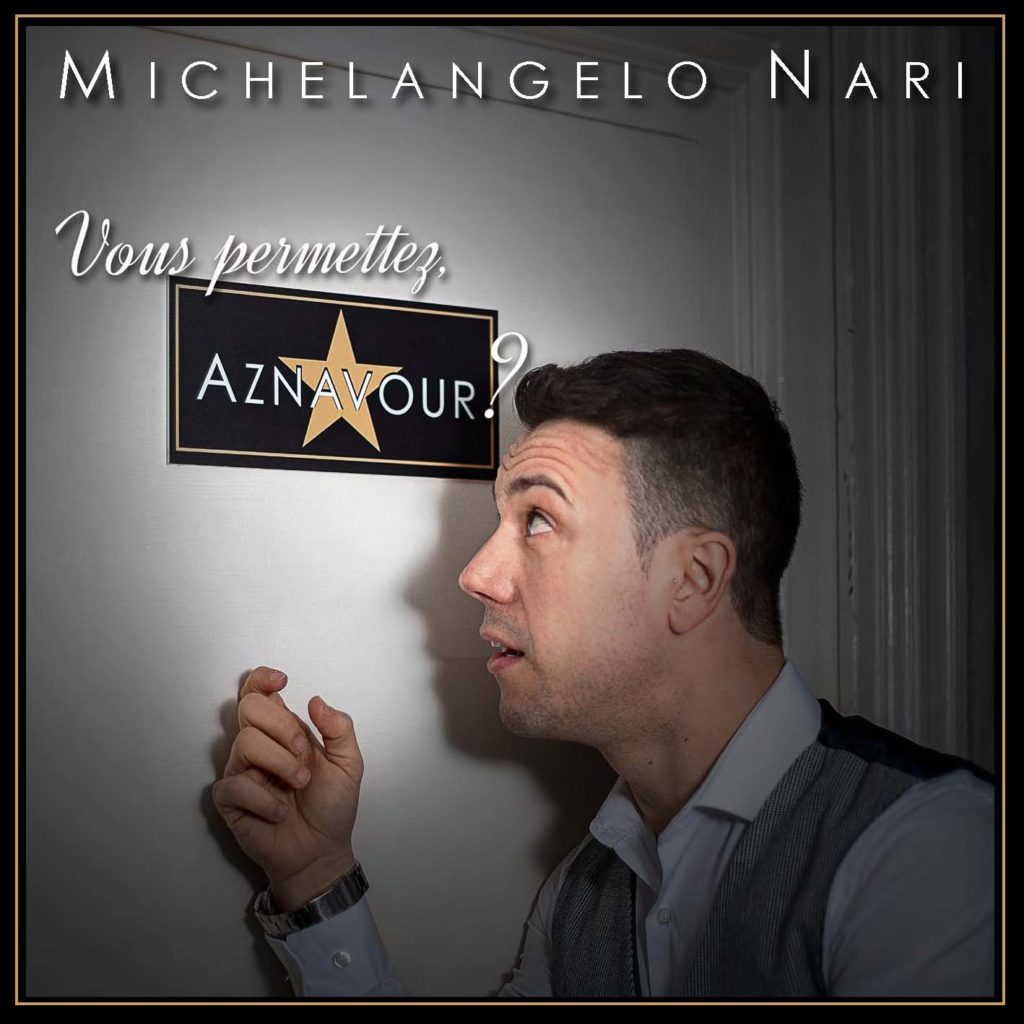 Good morning my friends! I couldn’t have asked for a better birthday gift: from today on, the CD “Vous permettez, Aznavour?” is officially available on this website.

Would you like to enter this world with me? Order your copy by clicking here.

For each CD purchased, I will make a €1 charitable donation to the Aznavour Foundation. 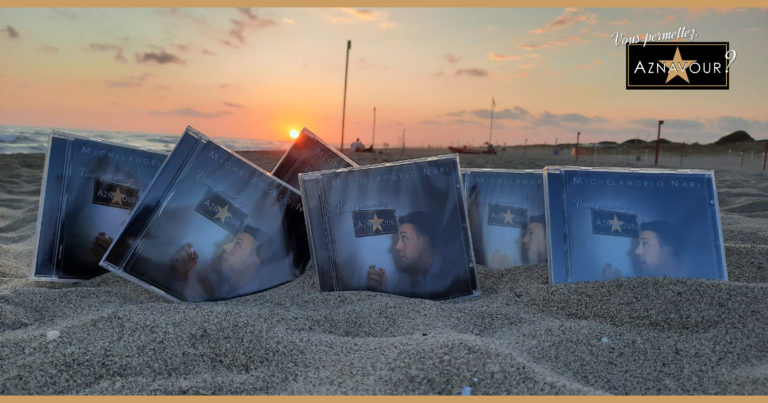 You’re more than welcome to share with me a comment, a review, a criticism or an emotion, if you wish; write me on my social medias or by mail, to info@michelangelonari.com. 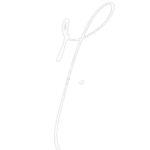 Just 8 days left before the release of the CD “Vous permettez, Aznavour?”!

In the past few weeks I have made all the ritual presentations, but now here is a small preview: a video trailer with songs and backstage clips at PlayRec Recording Studio, where everything has been recorded and mixed by the talented Fabio Fraschini.
Thanks to Giovanni De Filippi for filming and editing, and thanks to you if you will enter in this musical world.

The CD will be available from next Saturday on this website… enjoy the video! 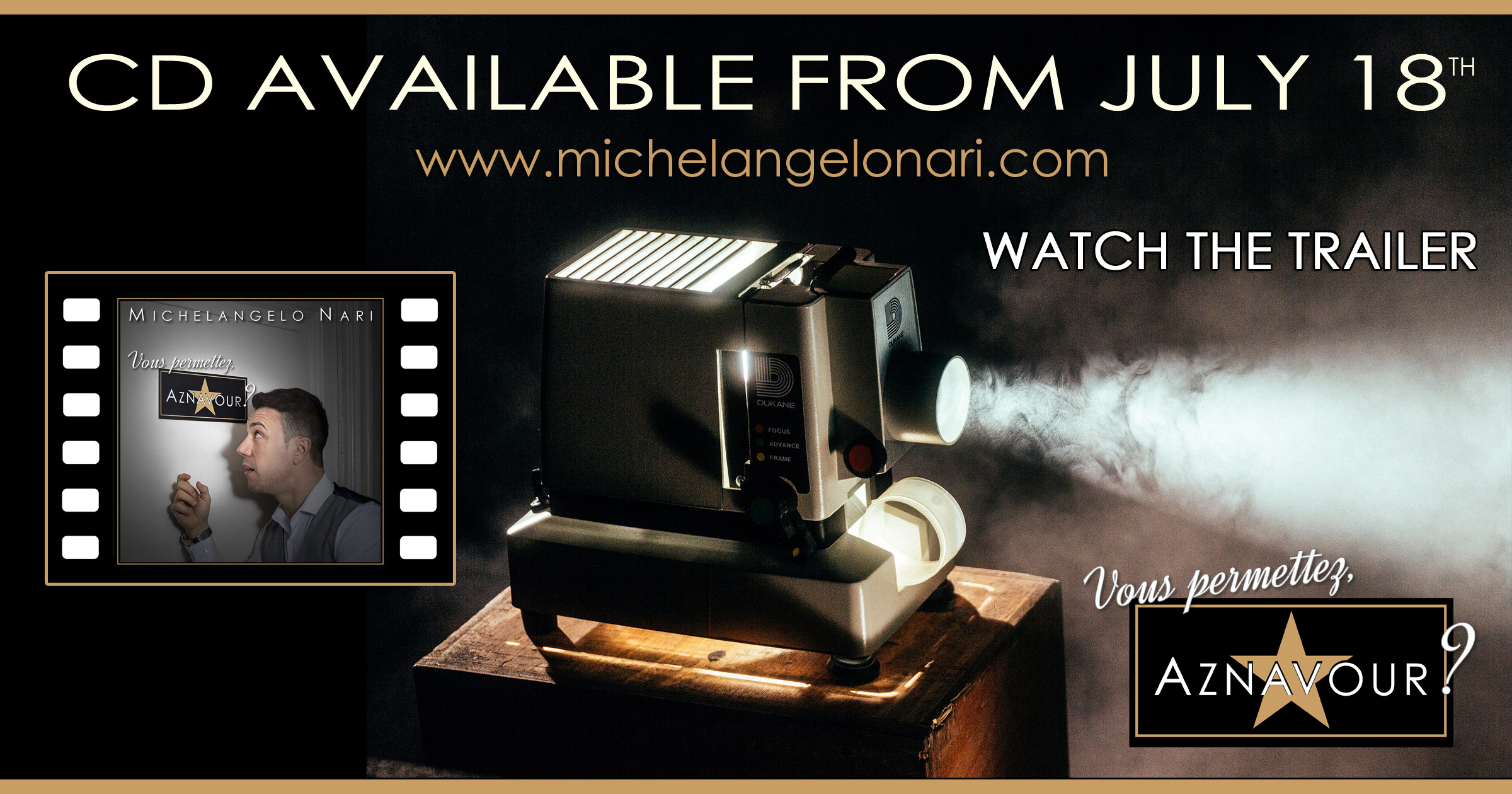 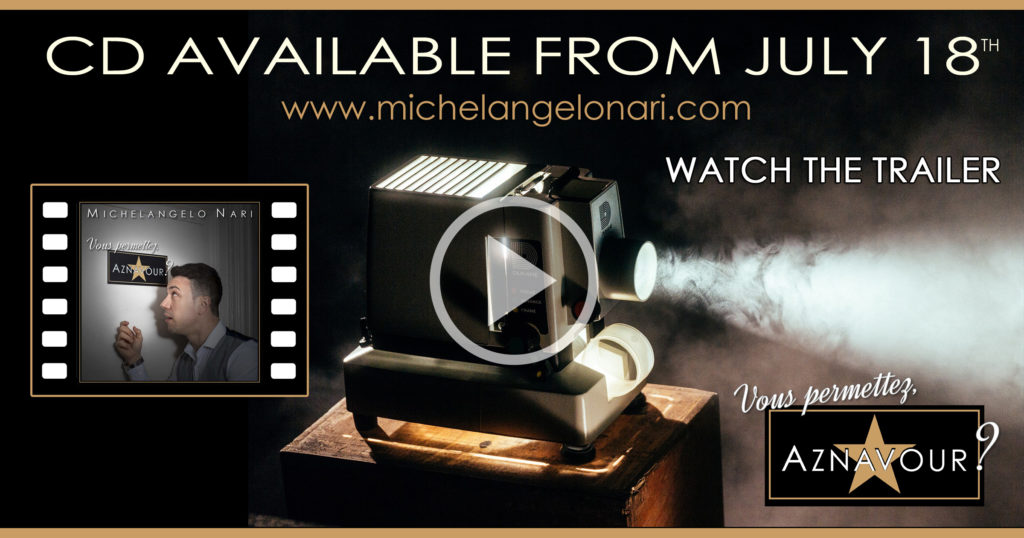 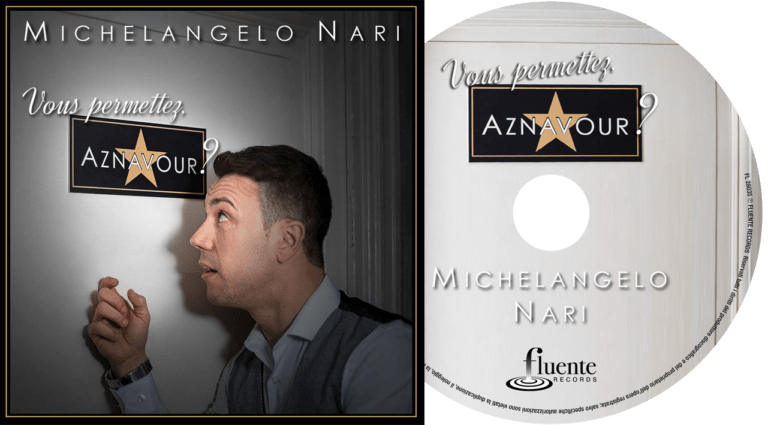 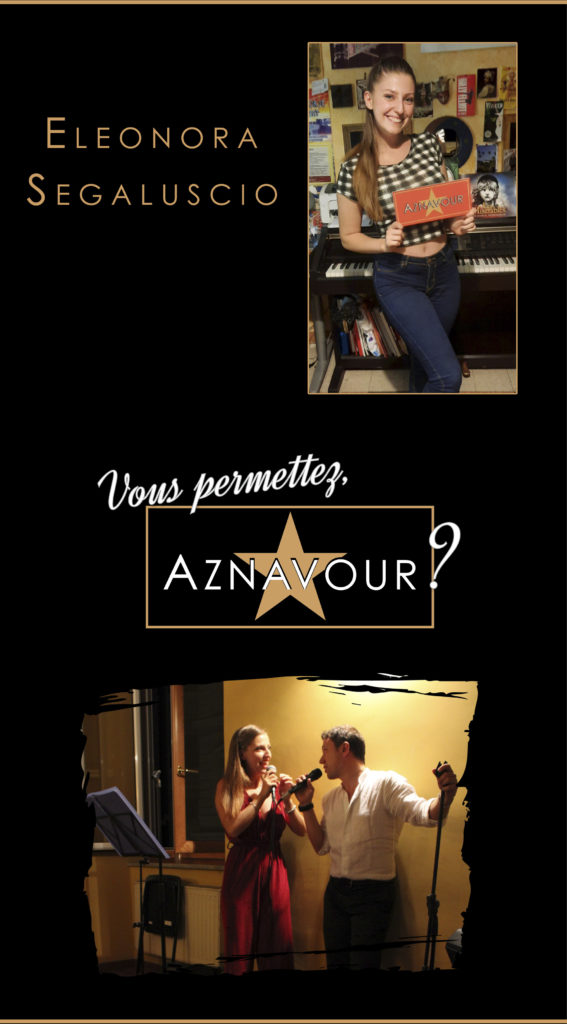 While the album is almost complete, I go on to introducing all those who have collaborated in its realization. This week I will tell you about the second Siren: Stefania Fratepietro.

A warm, elegant, enveloping and silky voice, an intense interpreter who immediately proved to be perfect for this project; it was a real pleasure to have her sing with me also because, for geographical reasons, Stefania brings me back to my childhood and my origins. We come from the same town in Liguria, did you know we even attended the same high school? 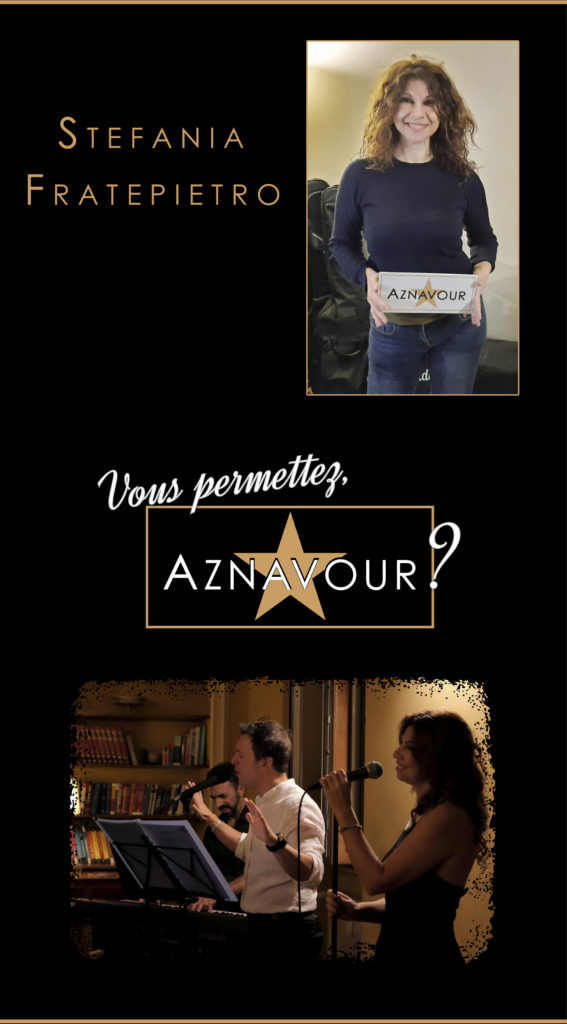 Stefania duets with me in “Mon émouvant amour”, a song in which Aznavour talks about love and the way of communicating this feeling with a mute girl: a bond that goes beyond words, that lives in vibrations, looks and energies. A song that was sung with many great performers, including Liza Minnelli.

“… a moving dance that you set for me, your fascinating gestures look like embroidery,

then when you point out that you love me, I understand that I like to see your voice”

She has more than 40 shows under her belt. She’s the lead in al lot of important musicals and shows; she is Beatrice in “La Divina Commedia”, Tosca in “Tosca”, Mercedes in “Il Conte di Montecristo”, Mimi in “Rent”, Ermengarda in “Hello Dolly”, Penelope in “Odysseus”, Serena in “Fame”, Jannyanydots in “Cats”, Carlotta in “The Mission”, Svetlana in “Chess”, Lady Macduff in “Macbeth”, Francesca in “Paolo and Francesca”. She is also on stage with “Grease”, “The little shop of horrors”, “Gastone”, “Promesse Promesse” and many more.

She is the producer and performer of three award-winning shows: “Ciao Amore Ciao – Tenco and Dalida between music and love”, “I Love You Are Perfect Now Change” and “Tomorrow Morning”.

She has won two awards for best actress, and she is vocal coach for the new Marvel Cartoon Network park in Dubai (IMG) and for the Premium Projects in Doha in Qatar. Artistic director of the Darec Academy in Rome, she is a teacher of the Caracciolo Academy Musical School and Management and of various academies in Rome and throughout Italy.

The photo on stage is by Paolo Cencioni