On 02/25/1999, a sixteen-year-old tennis fanatic listened to a song on television (“Belle”, in the French version of “Notre Dame de Paris”) and decided what he wanted to do with his life: sing. From that moment on began a long path made of studies, attempts, competitions, auditions: a road that is still in progress today and that I would never change, for anything in the world.

Once I graduated in Psychology, I totally devoted myself to music, starting to sing in different live bands. In 2006 I sang the song “Zidane il a tapé” which unexpectedly went gold. I worked as a back up singer with many vocal formations, until the period between 2008-2010 when the CD “Speranza” and some wonderful experiences in the United States brought me closer to Musical Theatre and to a more classical style of singing.

Once I returned to Italy once and for all, I continued to switch between various styles and I was fortunate enough to work in different productions, large and small, taking part in different and exciting musicals: among others, “Siddhartha” (on stage in Switzerland, France, Scotland, USA and Mexico), “L’Ultima Strega”, “Amalfi”, “The Sound of Music”, “The Wizard of Oz”, “Sanremo Musical”, “Sweeney Todd”; I also starred in a selection of plays (Gorkji, Ionesco, Molière, Marivaux, García Lorca) and in several productions in English and French.

But there is so much more than just theatre: I sang with Amedeo Minghi in the tour “La Bussola e il Cuore”, I am the voice for the French theme song “Gormiti 3D”, I am the co-adapter of the Italian version of the musical “Heathers” and I continue to sing live in a repertoire of different languages: each idiom has its own musicality and I like to travel into the sound of unknown words. I love new challenges and I always try to give my best.

About a year ago I rediscovered the music of Charles Aznavour and decided to produce the project “Vous permettez, Aznavour?”, with a CD and a theatrical concert entirely dedicated to the French songwriter: a way to honour him and to remind my voice and my heart what “being home” means.

Share0Tweet0Pin0Print0
Scroll back to top 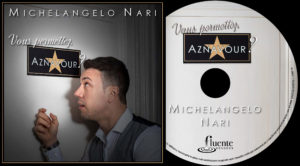 We use cookies to improve your browsing experience. By browsing the site, however, you consent to their use.I acceptRead more